Vanessa is from Lisbon-- not the cool one in Portugal, but a small town in Northeastern Ohio-- and graduated from Westminster College with degrees in Public Relations and Spanish. Vanessa credits her passion for foreign places and cultures to her grandfather, whose stories of growing up in Italy were devoured as indulgently as grandma's homemade meatballs. While in college, Vanessa hiked Machu Picchu and played with llamas in Peru; played mango baseball and went cave jumping in the Dominican Republic; and cooked paella and sometimes got mistaken for a local in Spain. When she's not at work, Vanessa can be found writing, doing yoga, trolling coffee shops, DIY-ing a new project, roaming the aisles of TJ Maxx, or binging Food Network and trying (mostly unsuccessfully) to recreate those recipes at home. 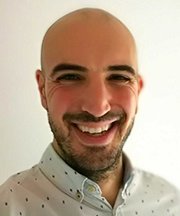 Although originally from Burgos, in Northern Spain, Neftalí has spent most of his life living around Spain and South America. He studied Social Education and Hispanic Studies at the University of Granada, after which he completed a master's degree in Cultural Management and Latin American Studies. He also worked as an educator addressing the needs of disadvantaged adolescents.

Neftalí enjoyed his experience in the Andes, working for five years as a literature professor and Academic Coordinator of ISA in Cusco, the gateway to Machu Picchu, and traveling throughout Latin America. After that, he returned to Spain to take over the position of ISA Barcelona Senior Academic Coordinator. In this role, he had the opportunity to interact with students and provide his support across a wide range of issues. Nef is a literature and photography enthusiast who enjoys exploring the wonders of nature and riding his motorcycle across the country. 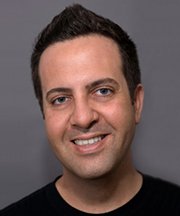 A native of Granada, Carlos moved to Madrid in 2002. He studied Business Computer Science in high school and Labor Relations at the University of Granada. He worked at a bilingual (English-Spanish) primary school in Granada. Carlos is also a professional actor and a voice actor. He has participated in various short films, theatrical performances, musicals, and commercials for TV. He loves to travel, meet people, and learn about different cultures. Carlos is a dynamic and extroverted person who is accustomed to working in a team environment. He has been working for ISA since 2004, and is a wonderful addition to the ISA Madrid team. 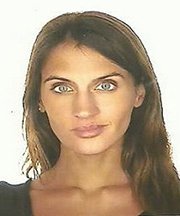 Anna was born in Italy and has loved foreign languages and cultures since she was a toddler. This led her to focus her studies on translation, interpreting, and literature, specializing in Spanish and English. Anna previously worked as an English and Spanish language teacher for many years, with students of all ages and backgrounds. She loves music, dance, sports, and nature. Anna is fond of traveling and meeting new people. 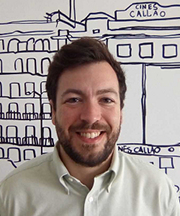 A native of the United States but with extensive family ties in Spain, Matt has always had an interest in Spanish culture and international travel and exchange. He earned a dual degree in Marketing and Spanish at Florida State University where he also discovered the joy of studying abroad through a semester spent in Valencia. Matt's work experience includes several years with international exchange groups through the U.S. Department of State and a year spent teaching English in Spanish schools. He loves to read, discover new places (especially the food in those new places), and continue to explore the delightful hidden corners of Madrid. Matt, like the rest of the ISA Madrid team, is fully dedicated to supporting ISA students during their time abroad and ensuring that their experience is culturally enriching, educational, and safe.

Born and raised in Valencia, Sara attended the University of Valencia. There she obtained her Bachelor´s degree in Art History. Before working with ISA, Sara volunteered in children's education and as an environmental advocate. Sara joined ISA in 2004 in the ISA Valencia office. She worked there until 2012 when she moved to Madrid to work in the ISA Madrid office. Within ISA, Sara has worked in housing, cultural activities, and is currently in the academics department. In addition, she does guided visits for the students. One of her passions is to travel and discover the monuments and history she studied in college. She has traveled to several countries including Egypt, Italy, and Ireland, as well as throughout Spain. She loves her job, travel, music, nature, and animals-- especially dogs.