Jenna completed her first semester abroad in a small town in southern Spain during high school and international education has been an important part of her life ever since. She has participated in three other study abroad programs, including a year in Santiago, Chile and has earned an MA in International Education Management from the Middlebury Institute of International Studies. Jenna finds joy and meaning assisting students in realizing international experiences to meet their language goals and increase intercultural competency. Outside of work Jenna spends her time knitting, frolicking outdoors, stretching and breathing, and visiting her home state of California. 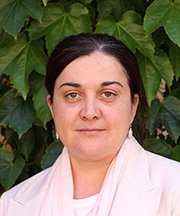 Originally from Cuenca, Spain, Carmen attended the University of Salamanca. There she obtained degrees in Art History and Pedagogy. Before ISA, Carmen got involved with study abroad arranging cultural activities and guiding tours for international students. Carmen joined ISA Salamanca in 2001 and worked there for almost six years before becoming the Santander and Bilbao Resident Director until 200. She then returned to ISA Salamanca to lead the office there. Her great knowledge of Spanish history and culture makes her an important part of the ISA program in Salamanca. Carmen's cheerfulness helps to create an easy-going environment with ISA students. She is dedicated to making ISA students' experiences in Salamanca rewarding. Carmen enjoys traveling, reading, and spending time with her family and friends.

Beatriz was born and raised in Salamanca, where she studied Psychology. After finishing her degree, she worked for two years in Mérida (Extremadura) with people with intellectual disabilities, developing projects focused on facilitating their entrance into the workforce. In 2011, she returned to Salamanca and joined the ISA Salamanca team. What she likes most about her job is the direct contact with students, getting to know them and helping them as much as possible so that they fall in love with her hometown, Salamanca! Bea loves to read, travel, and spend time with her family and friends.

Juan finished his studies at University of Salamanca's school of Philology in 1985, and worked as a professor of Spanish as a Foreign Language at Cursos Internacionales at USAL. During his time at the university, he traveled the world to places such as Belgium, Iceland, Brazil, Romania, Denmark, and France to give lectures and work with foreign universities to improve classroom instruction of Spanish. He has also published many articles in academic journals and books dealing with Spanish as a foreign language. Having taught students from around the world as a professor at the University of Salamanca, he brings great enthusiasm and knowledge to ISA. Juan's love for the Spanish language, teaching, and other cultures can truly be seen in his relationship with the students.

Roberto de la Calzada Cuesta is originally from Salamanca. He has a technical degree in Finance Administration and another in Business Studies from the University of Salamanca. He spent six months in Wales where he studied English and worked with international students. He also spent that time traveling around the UK, where he fell in love with its history, culture, and beautiful landscapes. He loves that his job allows him to learn about different cultures and be surrounded by great coworkers. Roberto's hobbies include travelling, watching movies, and getting together with his friends and family.

Born and raised in Salamanca, Rodri attended the Superior School of Tourism in Salamanca and completed advanced studies at the University of Salamanca. Rodri's love for international education was solidified while studying abroad on programs in London and Dublin. He entered the field working at a travel agency and then became the coordinator of cultural activities and excursions at Cursos Internacionales of the University of Salamanca. Afterward, he began working for ISA just for one summer…but fifteen years later he is still here! Rodri is a huge fan of the Real Madrid football club and enjoys running, watching movies, spending time with friends and family, and traveling as much as he can.